Joe Bennett Has a Case Against the Jeffersontown Police 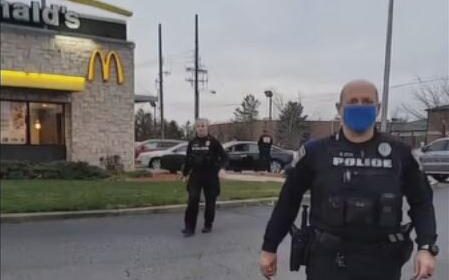 Joe Bennett, a Kentucky citizen, has a case, if he wants to pursue it, against the City of Jeffersontown, and two Jeffersontown police officers. In this article, I explain why I think Bennett has a case. I also go over which laws he might rely on in a potential case.

On Tuesday, November 24, one or more Jeffersontown, KY, police officers roughed up Joe Bennett. He had been recording a number of squad cars that had converged on a civilian car about 50 feet away from where he was standing. You can check out Joe Bennett’s cellphone footage here.

Police would later say the officers were investigating an attempted check fraud scheme at a bank across the street. In Kentucky, as in Illinois, and many other jurisdictions, it is legal to record the police, as long as they are performing their official duties in a public place while being recorded.

At the time of this incident, Bennett is 50 feet away from police officers who have pulled over a vehicle. Two of the officers walk over to Bennett, and one asks him for ID. Bennett asks him why. “Because you’re filming a crime scene investigation”, says the officer, “and you’re involved.” Bennett denies he is involved in anything. The officer doesn’t explain how Bennett may be involved. He simply states, “I need your ID.”

Bennett refuses, but before he can even complete his sentence, the officer — without uttering a word — grabs Bennett’s phone, punches him in the face (Bennett called it a punch, the officer called it an “empty strike”), and ends the video.

The police ultimately cite for something called “menacing” — placing another in fear of physical injury — and resisting arrest. The resisting arrest charge is interesting because the officers never actually arrest him. This begs the question: can you resist a non-existent arrest?

There are so many problems with the police conduct in this story, it is difficult to know where to begin.

What Laws Did the Jeffersontown Police Violate?

The police are subject to many different legal standards when they interact with citizens. What standard applies largely depends on the circumstances. That is, whether a police can use force depends on whether the situation calls for it.

Let’s go over the legal standards that would apply to Joe Bennett’s case. By understanding what the police can do, we can better understand what legal claims Bennett might have.

Under the Fourth Amendment, police officers are allowed to temporarily detain citizens to investigate whether they have been or are involved in criminal conduct, but only if they already have a reasonable suspicion of criminal activity by the person being detained.

Reasonable suspicion to detain a citizen is a lower standard than probable cause to arrest. But it still must be based on specific, objective facts, not just a hunch.

In this case, the police claimed that Bennett had been identified by one of the suspects as being involved in the check fraud scheme.

That assertion is dubious at best, given that the officers never mentioned this to Bennett on the scene, and that police later confirmed Bennett was not a suspect. And we know he was not arrested, and was never charged with anything involving the fraud scheme.

But even if the officer had reasonable suspicion to detain Bennett, his immediate use of physical force to grab his phone, to subdue him, and to strike him, appear to be completely unjustified. There is absolutely no justification for any use of force on someone who has simply refused an order to provide identification. (In Kentucky, refusal to provide identification is not an arrestable offense.)

Officers are allowed to use reasonable force under the circumstances to effectuate an arrest, but 1) Joe Bennett was never arrested, so the force appears unreasonable from the get-go, and 2) Bennett didn’t even have time to resist or do anything that would justify any use of force, let alone being taken down and punched or smacked in the face.

So many constitutional violations, so little time.

The first officers first approach Joe Bennett at 0:38 in the linked video. The officer grabs Bennett’s phone and begins to take him down 15 seconds later. The video is disabled (and terminates) at 01:15. So the entire incident for which we have video lasts less than 40 seconds. At least one of the officers has a body camera, so more footage should be available if it was recording.

Within those 40 seconds, the officers appear to have violated Bennett’s rights in at least five ways.

Then there is the unreasonable use of force, which is also considered an illegal seizure under the Fourth Amendment. This is known more broadly as excessive force.

The question is this: based on the information the officers had at the time they used force on Joe Bennett, was it reasonable to believe the force was necessary to either effectuate Bennett’s arrest, or defend themselves against an attack?

The video makes it clear that Bennett was never a threat. Nor did the officers ever arrest him. So it would be difficult to argue that their use of force was necessary to effectuate his arrest.

Even if he had been arrested, Joe Bennett never did anything to warrant the use of force.

Assuming all of this was done by one of the two officers who approached Joe Bennett, the other officer may be liable for failing to intervene to prevent his partner from violating Bennett’s rights during the incident.

The law requires that officers affirmatively intervene when they are able to prevent a citizen’s constitutional rights from being violated.

Finally, Bennett may have malicious prosecution claims under federal and state law if he can prevail on the citation he was given.

Based on the video footage, it is difficult to see how Bennett was placing anyone in fear of physical injury. Nor is apparent how Bennett was resisting an arrest when the officer assaulted him without saying a word, without announcing that he was under arrest, and without ordering him to submit to arrest. In fact, as noted above, Bennett was apparently never even arrested.

So yes, Joe Bennett has a case here.

The conduct in the video appeared to show unprovoked, unnecessary, and unreasonable police violence and seizures of Bennett and his property.

It may not be a particularly big case in terms of damages, but it’s a case that should be brought.

The law does this in at least two ways: 1) by allowing juries to award punitive damages for particularly malicious conduct, regardless of the amount of actual damages (known as “compensatory damages”) suffered by the plaintiff , and 2) by awarding attorney’s fees to a successful plaintiff’s lawyer to be paid by the defendant.

The law encourages citizens to bring meritorious civil rights claims specifically to discourage police officers from violating citizens’ rights. This goes for cases both large and small. But it only works by people actively enforcing their own rights by holding police accountable through civil litigation.

If you feel that your rights were violated by law enforcement, whether you suffered major or minor injuries, whether you were in jail a month, a year, or a decade, contact civil rights attorney Jordan Marsh at (312) 401-5510, or by email at jordan@jmarshlaw.com.

The information provided on this website does not, and is not intended to,
constitute legal advice; instead, all information, content, and materials available on this site are for general informational purposes only. Use of and access to this website or any of the links contained within the site do not create an attorney-client relationship between you and our office.

We offer free consultations to allow you time to consider the options available to you. Call the Law Office of Jordan Marsh, LLC.